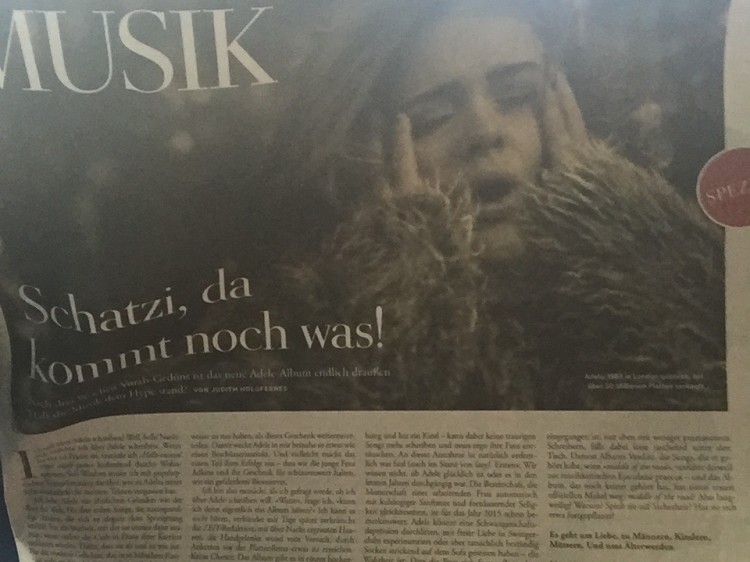 Hello? can you hear me? Errrm, no.

Do I want to to write about Adele, you´re asking? Well, hello! Of course I’d like to write about Adele. When nobody’s home I stomp through the living room, lustily belting out “Hello–oooooh! How aaah yew.” For weeks I’ve been arguing with pop-skeptical Twitter friends about who has shed the most tears to Adele’s new schmaltzy ballad.

I love Adele for reasons similar to those of the rest of the world. For her great songs, and the naturally powerful voice, which so elegantly sidesteps competition-style singing. For the way she always stubbornly retreats, just when other people would launch the “cash-in” phase of their careers. For the fact that she eats something, now and then. For her dry laughter, which stands in such stark contrast to the tear-drenched songs. For the way she morphs back and forth from diva to drinking buddy, while hardly batting a false eyelash. And, last but not least, for the vulnerability; her taste in fashion that she herself claims is that of a failed drag queen.

In summary: for the reason that she–in contrast to no-less-gifted colleagues like Beyoncé or Taylor Swift–rejects that American career model, which links pop success with hard physical work. How cheerfully we accept, in this era of talent-show boot camps, that your big break requires one thing above all: an iron will and rock-hard abs. Adele is the pop star for everyone who senses that the decision “artist’s life vs. career in the Marines” is not pure coincidence.

I have gotten to know mini-Adeles a few times in my life. People who are blessed with exceptional talent, which radiates from them at an early age. They all had one thing in common: a unique mixture of humility and shameless, overflowing joy in their own capabilities. An understanding that they are “gifted” in the narrower sense, blessed, and need do nothing more than spread this gift. And so Adele awakens something almost like a mother hen’s instinct in me. And perhaps that accounts for a part of her success–that we regard young Ms. Adkins and her gift to be worthy of protection, like an endangered preserve.

I was therefore delighted to be asked whether I wanted to write about Adele. “So,” I asked, “when can I actually listen to the album?” I can’t listen to it, I was sheepishly informed days later by Die Zeit’s editors, their hair greyed overnight, their wrists raw from chaining themselves to the record company´s front gate. No chance. The album will be available in a top-secret stream, one day before this article goes to print.

This practice is no surprise, in light of the worldwide evaluation- and overvaluation-debacles in pop music, and security-related paranoia is the natural reaction to new pressures. But an album release with security as high as this has its disadvantages–especially for an artist who tries to embody a form of anti-celebrity, with something almost like privacy, along with the explicit desire to be noticed through her music. Adele, who speaks openly of her fear of being crushed by the “Fame Machine,” is plotting the route of that very steamroller.

Because as soon as Adele shows a sign of life, everyone wants to write about her. And it only helps that she turned her back on the world in 2011 with an elegant shrug: a comeback story–like death by overdose or quarreling with the band–is the ultimate pop-journalism narrative. And so I find on the Internet, barely three weeks after the first “Hello,” page after page of new articles. They concern themselves out of necessity with speculation, the effort to piece together plausible assumptions from the slim information of recent years. The results, for the most part, are surprisingly artless.

“It’s going too well for Adele.” This, the most popular of the new theories, is based on a gripping thumbnail sketch: Adele is now in a happy relationship, with a child–so she can’t write sad songs anymore, and must ergo disappoint her fans. There’s something lazy (even lazy-assed) about this assumption: For starters: we don’t know about Adele’s happiness, or whether it stayed constant in the last few years. It’s simply astounding, in this year 2015, to see how willingly we equate the maternal status of a working woman with wide-eyed meekness. Adele could be suffering through postpartum depression, experimenting with free love in swinger clubs, or, for that matter, sitting on the couch knitting socks in an uninterrupted stream–the truth is: the fact that the woman has procreated tells us nothing (0.0%) about the content of the music she’s been making lately.

An artist as exceptionally gifted as Adele, who’s been writing songs since she was 14 years old, basically has a grasp of the entire universe. And the way her songs take shape probably has more to do with inner voodoo than with baby’s doo-doo. Perhaps the most disturbing assumption, naturally, is that the fans can’t bear to see a happy Adele. Maybe, just maybe, we have access to a bit wider range of emotions than that of, say, a puppy-dog. (Spoiler alert: I’ve since heard the album, and it’s sad enough.)

The second-most-popular theory: “Adele can’t cooperate.” Adele’s failed co-writing projects are dealt with page by page. Included among the “failed” projects are those sessions that “only” resulted in songs for certain inferior cohorts (Sia, Beyoncé). There’s talk of meetings with leading lights (Phil Collins), whom she never called back. Of a dust-up with Damon Albarn, and a cold shoulder toward Beyoncé, one of the few contestants for the podium in international vocal pole-vaulting. And again: neither we, nor the respective authors, can know what happened. If anything.

These fantasies add up to an unattractive portrait of cattiness and bossyness. The fact that Adele ultimately engaged in very successful collaborations, if only with less-famous writers, is quietly swept under the rug. Damon Albarn’s opinion that the songs he’s heard are “middle of the road,” meanwhile, strays into the premature ejaculation school of music criticism–so the album, which nobody’s even heard yet, has its first official flaw: middle of the road? Boring, then? Why? Is she playing it safe? Has she procreated, perhaps?

Only a few of the articles mention that Adele freely admits she has fervently tracked the charts since her childhood, and cites the Spice Girls as one of her most important sources of inspiration.

Theory number three: “Adele is a recluse, who will be ruined by pop.” So reclusive, so protective when it comes to her family, so vulnerable! Look, in Rolling Stone she’s not even wearing makeup! Just Photoshop! So the grand, tragic Amy Winehouse-story is ready to go. This scenario isn’t really fruitful, though, for someone who seems as clearly in the driver’s seat of her life as Adele.

And yes: perhaps Adele is not meant for truly great fame. Surprise: nobody’s meant for that! Mainstream pop is a soul-sucking infernal machine. Many people get through to the other side relatively unscathed. Let’s hope that Adele is one of them.

The album has since been released, and we assert: an important window of opportunity has long since closed on all of that advance racket. That goes not just for Adele, but for everyone else, too: hardly any new subject (be it a movie, a recording, or a global hot-spot) is discussed with pure, serious reflection for more than three weeks. After that, the rare interviews and substantive pieces are broken up into their individual parts, as press statements are digested until the cows come home, underlaid with photos of fright-induced red eyes from the red carpet. So the spotlights for Adele’s record are in place, and they have–surprise!–absolutely nothing to do with the new music.

I’ve listened to the album three times, as of this moment, and will stubbornly refrain from rendering my first impression as a considered opinion. Only so much: I was surprisingly quite swept up in the hullabaloo, in the end–and I had adjusted internally to the excesses of Autotune and Technobeats of the 90s. All clear: if this album is geared toward current conditions on the charts, then think of “alternative” examples like Florence and the Machine, Lorde, Feist, or even Sia: euphoric tribal drums, live choirs and joyful, extravagant melodic arcs. Yet without an attempt–and here we have a fly in the ointment–to match the textual breadth and depth of those (decidedly quirkier) examples.

The themes on 25, although beautiful, are rather narrowly drawn; it’s primarily about, well, just love, for men, children, mothers. And about aging (“You-ou-ou-outh! Where have you go-o-o-one?”), in a dosage that brought tears to this writer’s eyes–you want to grab this 27-year-old firmly by the shoulders and say, “Sweetheart!!! There’s more to come!!!”

For all the modern sounds, long stretches of the record are still very “retro”–there’s just hardly any of the 60s soul that was such an influence on 19 and 21. The new album makes a jump not of four years, but of ten–25 shines with melancholy rocking 70s-style songwriting, and swings, after three initial songs “in the spirit of the times,” over wide expanses from Carole King, to Carly Simon, to Bette Midler–and, more than once, to Irene Cara in Fame (When we were, All I ask). Big, easy, jazzed-up melodic lines, subtly grooving piano or guitar accompaniment, hook-lines that you’d love to hear sung by James Taylor–on the whole, with the great majority of songs, always hand-crafted and anything but overproduced. But if you begin to add a few too many drum-fills to the power ballads playing in your head, thinking of water as it splashes on drums in slow-motion, then you’re suddenly transported back to the 80s, with eclectic echoes ranging from Michael Bolton to Kate Bush.

So on balance, Adele has come up with my perfect evening of Karaoke in album form. And probably hers as well. I’m quite OK with it, in any case, and would hazard a guess that that goes not just for me–but rather, for pretty much anyone, from Joe Cocker fans to stocking-capped Indie-Folkies.

So let’s hope that Adele can just rewrite these last few weeks–preferably with live concerts, which would allow her to sing the new songs directly into our hearts, without mistakes in translation. To enchant us all over again, with her serious, soulful voice, and a few good-humored bits of stand-up. May the new songs blow everything else away. But it would certainly be easier, from the start, to let the music do the talking. Or the singing.