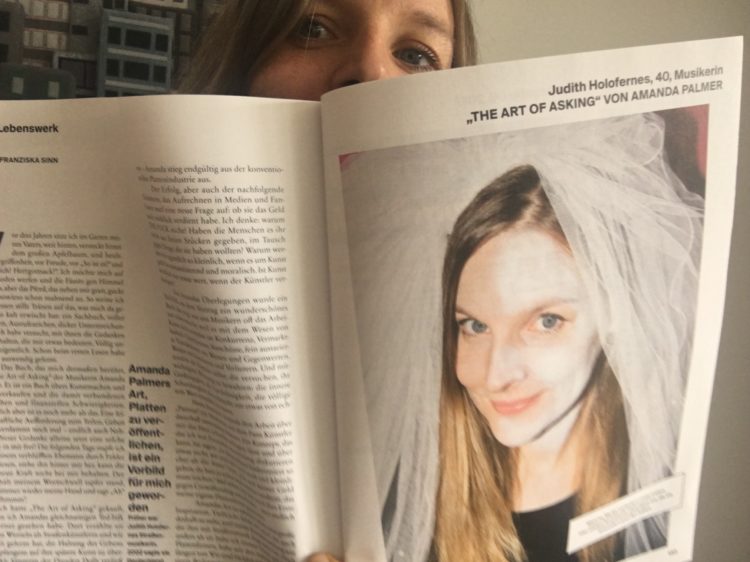 The Art of Asking (A Thank you Note to Amanda Palmer)

In their segment “Mein Lebenswerk” (“my life´s work”, a funny but confusing title considering it´s about other people´s work,) German magazine NEON asks people to write about a work of art that “changed their life” – and then they dress them up accordingly. That´s how I finally got to write a long due paean for my beloved “Art of Asking” and my new found idol, Amanda Palmer. Also they dressed me up as an eight foot bride (read book for further explanation)!

I´m posting this in English in consideration of Amanda´s many international fans, the German version is still available in print! Will put that up too, once it´s out of Kiosks.

So, here it goes:

THE ART OF ASKING by AMANDA PALMER

I sit in my father’s garden, way in the back, hidden behind the big apple tree, and cry like a baby. I weep tears of profound emotion, of “Exactly!” and “Finally! For God’s sake!” I would like to throw myself on the ground and thrust my fists to the sky, but the horse grazing near me casts an admonishing glance in my direction. And so instead I weep silent tears, and they fall on the uncomplaining pages of a how-to book. All my notes–exclamation points after every other sentence and thick, affirmative underlinings–are completely smudged, but I’ve read this enough to know it by heart anyway.

The book that’s putting me through such a wringer is The Art of Asking, by Amanda Palmer. A book about making art and selling art and the emotional and financial difficulties associated with that. But actually an earnest invitation to share, give, and–damn it all–finally take, what people want to give you.

Over the next few days I tramp through the countryside with my bewildered husband, walking much too quickly as I pull him along behind me, I can’t keep all this new energy to myself. The man bears up bravely to my enthusiastic harangue, takes my hand, and says: “Oh.” And: “Mhmmm.”

I bought The Art of Asking after I saw Amanda’s similarly-named TED Talk on the Internet. She speaks there of her roots as a street performer, as a living “Five Foot Bride”-statue, and of how she learned, from that, to translate this attitude of giving and receiving to her later art.

In the late 2000s, when she was lead singer of the Dresden Dolls, and right in the middle of the promotional phase of the duo’s first big album, Amanda Palmer left her record label. She rated there as an “underachiever,” a non-starter, with 100,000 copies sold, because the overblown expectations of the record company didn’t pan out. Shortly after that separation, Palmer raised an uproar with the first large-scale crowd-funding coup in music history: her fan base put up over a million dollars for the first solo album. Amanda made a definitive exit from the conventional record industry.

The success, but also the shit-storm that followed it, the bitter score-settling in the media and fan forums, raised new questions: did she really earn the money? Why the fuck not? Didn’t the people give it to her of their own free will, in exchange for things that they wanted to have? Why are we so petty with regard to artists? Is the art only worth something when the artist goes hungry? And above all: why are we always engaged in hand-to-hand combat with the “Fraud Police”–out in the world, but even more so right here: every time we look in the mirror?

From those considerations came a TED Talk, and from the talk came a wonderfully lovely book: about the roots of this austerity, with which we and others make both life and work difficult. Because we have to come up with accounting schemes and recipes for success, which are not compatible with the essence of art. Competition, marketability, chart systems, advances. Bets, with winners and losers. And in the middle of it: the artists, who try to preserve their craft–the inner generosity, really, the fearlessness, the utter defenselessness that it takes to bring anything of real value into the world.

Today, Amanda Palmer finances her art through Patreon, a subscription system, in which fans can support their artists on an ongoing basis, without them having to swing wildly from one mammoth project to the next. An idea that makes my heart race, one that I’ve discussed with friends until my tongue was about to fall off. The gist of our conversations: “That would never work in Germany, we’re much stingier with our money than the Yanks are.” And “Nobody’s going to give money to you, you’ve already earned money, some eight year´s ago, that has to be enough.” We’ll see. For now, I’m finally releasing my new album on my own label, “Därängdängdäng Records,” and thank you, I´m feeling much better now. Although trying to sell a piece of plastic to people who have “the internet” still feels like a concept that can be improved upon.

Amanda has touched my most sensitive spots with those probing, piano-playing fingers of hers. It’s true: unlike her, I’ve always had luck with record companies, and have worked in the best conceivable circumstances since the magical beginnings of Wir sind Helden. Nobody’s meddled with us. But despite that, I was increasingly unhappy, feeling numbed in my bones about being somebody else’s show horse. And I’ve been completely torn over the effort to cash in on odd definitions of success. And then Amanda looks me deep in the eyes and says, “You’re not crazy. And also not ungrateful. You’re only unhappy with a form of work that contradicts your mission. And yes, that has to change.”

*Please everybody check out Amandas amazing work and go be her patrons over at Patreon!