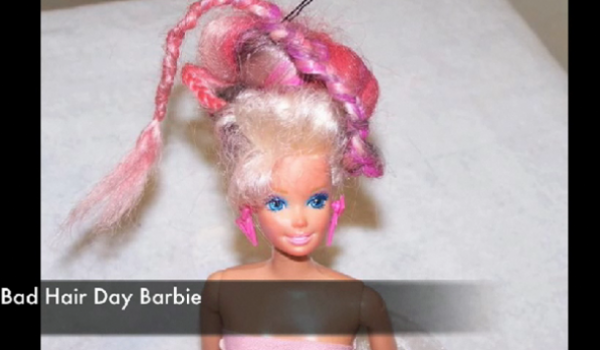 “Neeeelia, do I get Barbie?” ……. “No idea, do you?” Frustrated child-silence, aggravated child-eye-rolling, barbie-thin child-lips pressed together. But yes, obviously, that was the only appropriate answer to my question. “Do I get…,” naturally, was in fact a euphemism for “Are you buying me…,” just as “Neeeelia” was a euphemism for “Mama,” but my mother Cornelia took me at my word, as she so often did. And thus had every reason to ask herself whether I–her commune-socialized hippie daughter, disheveled on the inside as well as out–really got Barbie. I had clearly proven, a few weeks before, that I didn’t get patent leather shoes. I had grumbled for days on end. Then, for a few hours, I wobbled around triumphantly in the dainty grumble-begotten footwear, with the pained smile of an American child beauty pageant loser. Only to sheepishly admit, afterward, that I obviously just didn’t get them: patent leather shoes. And this despite the fact that we lived not in Berlin’s Kreuzberg quarter, but rather in the Breisgau city of Freiburg, where, I was convinced, a person could really use patent leather shoes. I had just started school, and because of my–attention: third euphemism— ”countercultural background” had just been christened with the nicknames “Punker” and “Nobody”–”Nobody,” naturally, because I had really never been christened and therefore technically did not exist.

From the depths of this psychosocial distress I undertook some initially tentative attempts to assimilate, and made contact with the dull, pink-skinned neighbor kid Sabine. And Sabine, clearly, got Barbies. Many Barbies. Barbie estates, Barbie horses, Barbie personal shoppers, Barbie catwalk, Barbie hair salon with Barbie Brazilian-Wax studio, Barbie townhouses, Barbie babies complete with the operating table for the Caesarean-section birth to preserve the Barbie cervix and the Barbie-like figure. And I had managed to get through multiple play dates safe and undetected in my childhood despair, through skillful mimicry. Just like Sabine, I had simply seized the Barbie briskly by the ankles and then marched her through the bright pink children’s room in that typical wobbly, foot-shackled Barbie gait. I had suppressed any cultural references to my brand-new favorite film, The Defiant Ones. And so by the end of these appointments, formally declared or not, Sabine had to have regarded me as almost exemplary. Probably she had simply chosen me as her imaginary friend.

And so now I stood in our six-square-meter attic kitchen and argued, with the audacity of despair, for my getting a Barbie. At least one. Behind my mother’s eyes a film seemed to be running, which played dramatic daughterly scenes from the past few months and years: the excessive, if cool-headed, use of carving knives; the building of huts and burrows; the grinding of dried beans into something almost edible; or the sexually charged role-playing games, set mostly on cruise ships, with my Berlin friend Aline. In which the last staging was the only one that represented no thinly-veiled version of the basic model, The Fugitive, with me in the role of Dr. Richard Kimble.

As I anxiously waited for her verdict, my mother seemed to reach the end of her nostalgic little Super-8 filmlet and immediately began to draft in her head the obligatory morally-amused master’s thesis in storytelling: “Barbies… Don’t we all carry a little Barbie inside us? For many….” I saw the corner of her mouth twitch, but I didn’t understand what could have been so funny about it: I had just graduated from The Fugitive to The Defiant Ones. The most normal thing in the world for a six-year-old.

And my mother, in her unending wisdom, realized instinctively what was at stake for me. She kept her thesis to herself. She even refrained from the obvious Barbie/patent leather shoe comparison. And a few days later she presented me with my foot-shackled, curvaceous gift. How I loved my cowboy-mother at that moment! Despite my tender age I was humbly aware of what an effort of cultural adaptation it had to have been for her to submit herself to a Barbie sales specialist at Karstadt’s Department Store. And she definitely sought advice, because what I held in my hands in that moment of feverish anticipation was in fact a Premium Barbie, blond and long-haired and solidly-sinuous like she was supposed to be–and not, as I had imagined in the nights leading up to then, some Barbie-substitute, or one of Barbie’s shabby female sidekicks, who were in fact manufactured only for Barbie-bewonderment.

With racing hearts, Barbie and I disappeared into my room. I closed my eyes and in my imagination quickly painted everything pink: the snot-green secondhand children’s furniture, the been-there-done-that carpet, the picked-apart spider plants and avocado palms. All my mangy stuffed animals got bound up with imaginary little bows, in my mind’s eye I filled my entire bookshelf with Wendy novels. Now it could begin. I boldly gripped Barbie by the ankles. Take a deep breath. Focus. We need a goal. We need… a… we need… a… we need… we need… we need. Oh, dammit.

I didn’t want to admit it, but after only a minute and a half alone with the doll the Barbie Principle had revealed itself to me in all its cruelty: With a Barbie you can’t play, with a Barbie you can only need. Or, at the most: have.

A house, for example! But we didn’t have one. A horse! We didn’t have that, either, only a hippopotamus, which quickly seemed to moan under its dainty load. One single Barbie-bewondering sidekick? My favorite cuddly toy, a homemade Snoopy with sock-ears and dead sock-eyes begged off. “Personal differences.” I resolved to give up all hope for outside help and simply integrate Barbie into my old games. Full of misgiving, I tried to push the handle of my bean-grinder into Barbie’s hand. Too big! I made Barbie totter on her little feet into the fort I had built the night before. She rolled her eyes. And anyway the look of the little lady, dressed to kill, seemed a bit out of place in this rustic setting–bear in mind that back then there were no “Celebrity Jungle Camp” TV shows yet. Setting beetles or bloodsuckers loose on Barbie’s face, an entertaining idea, didn’t occur to me either. My gaze wandered to the carving knife. Horrified by the visions that rose to my mind, I turned away from it immediately.

After a minute of silence I resolved to assign to Barbie a rather passive duty in the landscape of my play-universe: returning to my old favorite subject, I offered her the role of Dr. Richard Kimble’s murdered wife–and she, in a realistic appraisal of her alternatives, accepted. I lovingly laid her on the windowsill, her head in a decorative marmalade stain, a bean-stained telephone receiver in her pleading, outstretched hand. There she would stay, in her marmalade stain. Except for a few brief moments of resurrection, for example, when Mother came in unexpectedly and I paraded the deranged and marmalade-haired Barbie around the room. Or for occasional visits to Sabine, for whom I even washed the marmalade out of the hair. Until a few weeks later, anyway, when nobody was allowed to play with me–because out in the yard I had brewed tea from herbs, such as ivy, and had then offered them to Sabine and her friends, saying, “With this you can make yourself totally disappear.”

P.P.S.: The piece has already been published, in an abridged version, in Freitag:

… and in somewhat longer form by the Freiburg Literature Office: